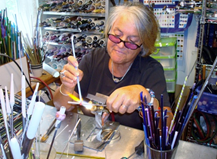 Mimi Huszer Fagnant has been a professional craft designer and craft teacher since 1977. She’s worked as a designer at a bead manufacturing factory where she worked with colorists developing bead colors and worked with mold makers and model makers to create new products. In 1994, Mimi started making her own glass beads utilizing the lampworking technique. Mimi sells her work locally and at bead and craft fairs.

Mimi uses a propane and oxygen torch to melt glass rods of many colors. The molten glass is coaxed into limitless shapes of beads. Mimi spends much time creating sculptural glass pieces as well as beads. These mini sculptures are used in fairy gardens, mobiles, ornaments and sun catchers. Many of her beads are used as a pendant, such as her trumpet flowers, sterling lined large beads and hearts. Mimi has found her true passion in lampworking. Every time she sits at the torch there is something new she was to try or further develop, thus her product line is ever changing. Her line also includes beads for jewelry makers to make their own jewelry, her own jewelry pieces using these one of a kind beads. She sells an assortment of kits using her beads as a component for the project. Most of the kits have been developed from the many classes she teaches locally, mostly for the North Kingstown Arts Council. Her love to share knowledge is evident in her teaching style. Most of her work is sold at bead and craft shows, and the Artist Cooperative Gallery of Westerly.

Mimi is another artist with ties to Cornelius Island, Michael de Guzman, and the start of the Wickford Art Festival! Mimi lived on Cornelius for 1 summer with her father, John Huszer (credited by many as the originator of the Wickford Art Festival.) Michael de Guzman wrote a book inspired by this, ‘The King and Queen of Moonlight Bay’ in 1982. Hallmark made it into a movie in 2003, although there’s little resemblance to the original script.
Michael donated Bush Hill in memory of his mother, Addie Lynch. His book, ‘Strangers’ has Wickford connections throughout. It was made into a movie, starring Bette Davis (Addie) and Gena Rowlands, in 1979.

Meetings are held on the 2nd Wednesday of each month at 7pm. The public is always welcome to attend. New proposals are due before the 1st Wednesday of the month. (Two months before your event is recommended.) See our project proposal here.